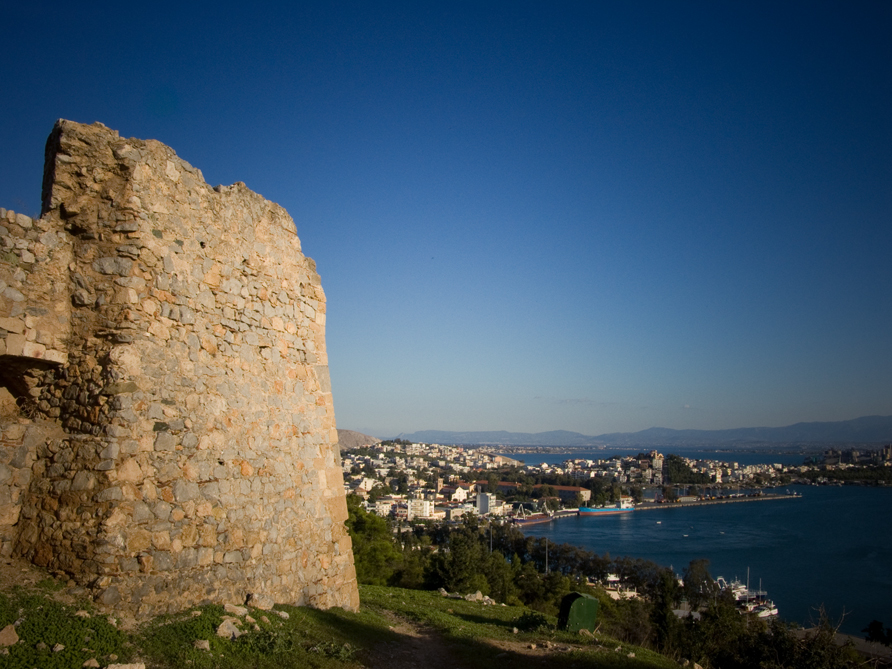 The modern city of Chalkida or Chalkis is situated on the strait of Evripos, and on the location of the ancient city. It is mentioned in the Iliad, and the ships that sailed for the Trojan War gathered at Avlis, a city that lies on the mainland near Chalkida.

Chalkida is the capital of Euboea, an island close to the mainland, and is joined to it by two bridges. The old bridge spans the straight at its most narrow point. The bridge opened up whenever larger ships sailed down the strait. Now there is a beautiful new suspension bridge to the west of the old one.

Chalkida was joined to the mainland with a wooden bridge in 411 BC. Over the centuries many bridges were constructed – some movable, some fixed, some swinging, wooden or metal. The old bridge that still exists was built in 1962.

Chalkida is famous for the unique phenomenon that takes place at the straight. The waters run north for six hours, they stop for one hour, and then they change direction and run south for another six hours.

The city is a popular destination, as it is not far fromAthens. Along the waterfront, facing the sea and the straight, there are a multitude of cafes and tavernas. On sunny days, even in winter, they are full of people who enjoy a good meal, or a nice iced coffee in a tall frosted glass and laze in the sun looking at the ships and the fishing boats. Across the city, on a hill on the mainland, there is a fortress, which was built by the Turks in 1684 in order to protect Chalkida from the Venetians, who used to occupy the town before the Turks. Apparently Kara-Baba Sultan was buried on that hill, and the fortress was named Karababas. The fortress’s strategic position enables it to control the Strait of Evripus and the city of Chalkida.

Francesco Morozini, the Doge of Venice, unsuccessfully besieged the fortress in 1688, and the Turks remained there until the liberation ofGreece.

As a matter of interest, I should mention that the year before, in 1687, Morozini wanted to liberate Athens from the Turks. At that time the Turks used the Parthenon as a powder magazine. On September 26, Morozini scored a direct hit on the Parthenon and turned the monument to a ruin. To add insult to injury, he described it as a “fortunate shot” and then tried to remove the horses of the goddess Athena from the temple. However, the attempt was unsuccessful and the horses fell over and smashed on the rocks below. A year later the monument was taken over by the Ottoman Empire, and realizing that there was great demand, they began selling souvenirs from the Parthenon to buyers around the world.

Unfortunately, today the fortress of Karababas is in disrepair, especially the southern section. However, the view from the fortress is beautiful. You can see the straight of Evripos and the city of Chalkida. There is also a nice café nearby where one can enjoy a leisurely cup of coffee. And later in the day, the visitor can sit at a taverna and enjoy a meal with fresh fish, just brought in by the fishing boats. A dish that is worth having is a fish soup, called ‘kakavia’. It is made by the fishermen on their boats with fish from the day’s catch. Kakavia is similar to the French bouillabaisse, but more on the rustic side. If you can’t go to a Greek fishing village to taste the soup, you can make it yourself at home. Just follow the easy recipe and enjoy!