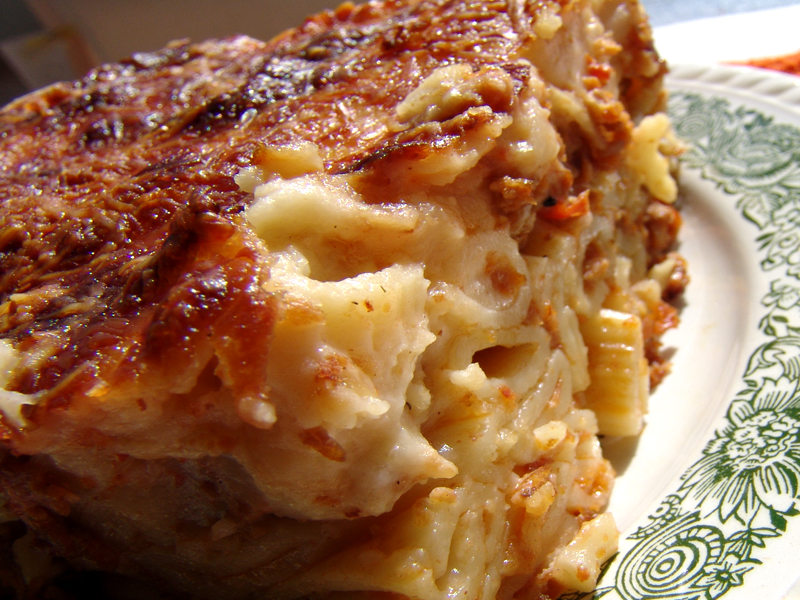 This is another version of the traditional pastitsio and I prefer it because you don’t have to be very careful with weights and measures. You just mix everything together, except the béchamel sauce, and you have a scrumptious meal. It can also become a very tasty vegetarian dish if you use soya mince and grated vegetables.

Bring water to a boil in a large pot and add some salt. Drop the penne in the boiling water and cook it until half done, about 4 – 5 minutes.

In the meantime, separate the eggs. Beat lightly the whites. Strain the penne and return them to the pot. Add the margarine and mix until it melts. When the penne cool down a little, add the beaten egg whites and mix well. Add half the grated cheese, and mix again.

In the meantime prepare the mince sauce. Put 2 – 3 tablespoonfuls of oil in a deep frying pan and brown the minced meat (or a mixture of meat and soya or only soya) together with the onion stirring and breaking up the lumps of meat until there is no pink color. Add the carrot and the zucchini and sauté for 5 minutes longer. Add the wine to the pan and allow it to evaporate. Add the tomatoes, garlic, cinnamon stick, cloves salt, pepper and 2 cups of water. Simmer until almost cooked. Take the pan off the fire, and put it aside. Remove the cinnamon stick and the cloves. Add the rest of the grated cheese (leaving a couple of handfuls to sprinkle on top of the white sauce) and mix well. There must be about a cup and a half of liquid left.

Place the margarine in a pot and melt it at low temperature. Do not boil. When it is melted, add the flour and stir continuously until the margarine has been absorbed. Warm up the milk and begin adding it a little at a time, beating well after each addition, so that there are no lumps. Take the pot off the heat. Beat the egg yolks (that you have separated from the whites) and add them to the mixture beating well. Add salt and pepper to taste.The sauce should be rather thick. Add the grated nutmeg. Always taste and adjust seasonings before assembling the pastitsio.

Lightly oil a deep, medium sized pan. Sprinkle a very thin layer of bread crumbs on the bottom of the pan. Now pour the mince sauce in the pot with the penne. Mix well with a wooden fork or spoon. Pour the penne in the baking pan. With the back of a spoon arrange the penne so that they have the same thickness everywhere. Pour the milk over the surface of the pastitsio. Finally spread the béchamel sauce on top and sprinkle the rest of the grated cheese.

Bake in a pre-heated oven at 180oC (340o F) for about 50 minutes to one hour, until cooked through and the top is golden brown,

Take the pan out of the oven and let it rest and cool down for half an hour. Then cut it in squares in squares and serve, with a nice Greek salad or a fresh green salad.