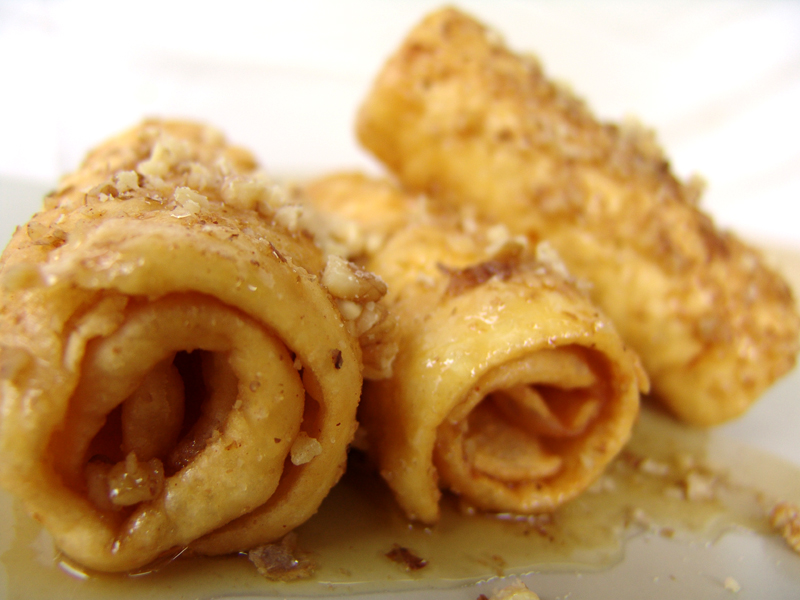 This sweet is traditionally made at Christmas, but in some regions it is also served at engagements and weddings. Its origin is lost in the mists of time. Originally they made the diples in Mani, a very poor region in Peloponnesus using only flour and water as eggs were very scarce. Usually the main ingredients for the traditional greek sweets were flour and water, and a lot of imagination. The people were poor and they had large families to feed, so they used whatever they had on hand. But these humble sweets have evolved and are so good and tasty that although they are time consuming they are still made by women, especially those living in villages who uphold the traditions. At this time of the year, we can get them at the super markets and confectionary shops – but they seldom are as food as the home made ones.

2 eggs
2 egg yolks
¼ teaspoon baking soda
2 tablespoonfuls sugar
Pinch of salt
Juice of half an orange
Zest of an orange
Zest of a lemon
About 2 cups flour
Vegetable oil for frying
For the syrup:
2 cups sugar
1 cup honey
2 cups water
Walnuts pounded in the mortar or finely chopped
Powdered cinnamon

Beat the eggs and the egg yolks with the sugar. Add the salt, zest of the orange and the lemon, the brandy, the baking soda stirred in the orange juice. Add the flour in tablespoonfuls, until you have a dough that is not too stiff, so that you can roll it out easily.

Divide the dough in two balls, wrap them with shrink-wrap and put them in the fridge for two to three hours. Sprinkle some flour on the counter and roll out the dough in very thin sheets. If the dough is a little sticky, don’t add more flour. Just sprinkle lightly the counter with flour.

Cut the dough in ribbons about 6 cm wide and 15 cm long. Line the ribbons on one corner of the counter and cover them with a wet towel at all times, so that they don’t dry out.

Pour oil in a small pot or a deep frying pan and when it is hot (but not smoking) pick up a ribbon with a fork. Dip it in the oil, rolling it around the fork. Fry it until it is light golden brown. Repeat with the rest of the strips. Fry two or three at a time, so that they don’t burn. Lay them on absorbent paper. When all the dough strips are finished, prepare the syrup.

The old housewives scoff at the syrup. They maintain that plain honey drizzled over the hot diples is perfect, because it melts by the heat and is absorbed by the sweets.