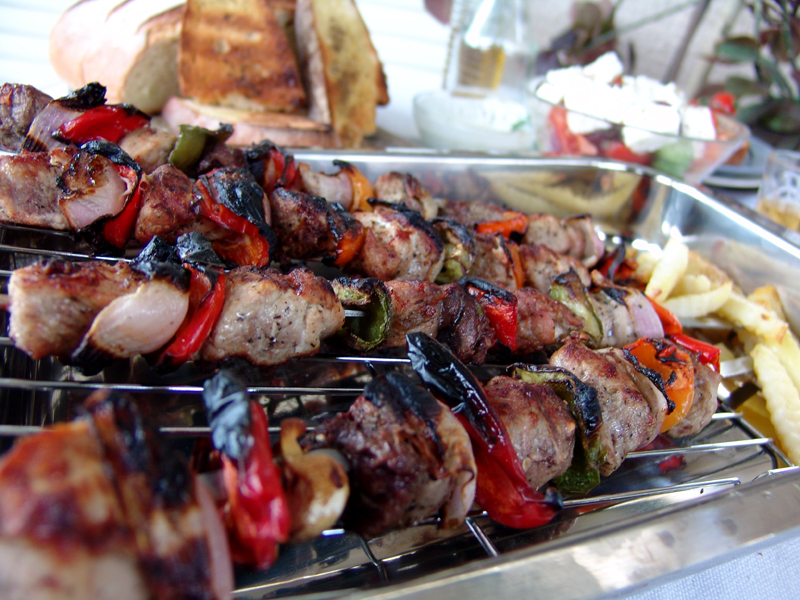 After my stroll down to Monastiraki Square, I decided to invite some friends over to have a little barbecue. The menu was Greek souvlaki, Greek salad, tzatziki, French ‘fries’ (baked in the oven), baked vegetables, cheese roasted on the spit and bread with olive oil and oregano also roasted on the spit. I had brought a fantastic wine from a village outside Kalamata which did the feast justice. I will give you the recipes of everything, so that you can try them out.

TIP: If you use wooden skewers, soak them in water for about half an hour. This way, they won’t burn when you barbecue the meat.

Cut the pork into pieces, neither too small nor too large. Or you can ask your butcher to cut it for you. The night before you want to cook the souvlakia, place the meat in a large plastic container in one layer. Sprinkle some salt and pepper, the oregano and the rosemary. Add the crushed garlic. Pour the oil over the meat and the vinegar. The vinegar softens up the meat and it doesn’t smell afterwards so don’t be afraid to use it. Mix everything well. Clean the onions of their outer leaves and cut them in half. Separate the layers leaving them whole. Put the onion pieces in between the meat. Cut the peppers in half and remove the seeds. Cut each half in thick slices and cut each slice in half if the peppers are large. Place the pieces of the peppers in between the meat. Add the pieces of zucchini and egg plant, as well as the mushrooms. Cover the container and place it in the fridge until it is needed the following day. You can safely keep it in the fridge for two days.

Take the container out of the fridge and skewer the meat alternating with the vegetables.I couldn’t use the mushrooms, because my metal skewers were too big and mushrooms just broke up.

If you are barbecuing, place the skewers on the fire, watching them so that they don’t burn.

TIP: When I am in a hurry, and I don’t have time to light up the coals in the barbecue, I prefer to cook them indoors. I cut the meat in smaller cubes, so that they will cook faster. Then I proceed to skewer the meat and any vegetables I use.

Place a large pan on your stove. When it is hot, place the skewers in the pan. Reduce the heat to medium and let the souvlakia cook, until they brown. Turn them over and cook them on all sides. This gives them the flavor and it is well worth the extra trouble. If they are not quite done inside, place them in a pan and put them in a pre-heated oven for 5 – 10 minutes, depending on the size of the pieces of meat, turning them over once or twice.

When you serve the souvlakia, you can put lemon halves on the side so that whoever wants can squeeze some lemon juice on them.

You can accompany them with a nice fresh Greek Salad, grilled bread brushed with good olive oil and oregano, grilled cheese, and of course tzatziki!

You can’t imagine how tasty and decadent grilled bread is when you brush the thick slices with olive oil and you sprinkle them with oregano and perhaps a little salt. You can either grill the bread on the spit, next to the meat, or in the broiler. Just get bread that is ‘compact’, perhaps a sourdough kind of bread – not the fluffy ‘sponge’ like white bread.