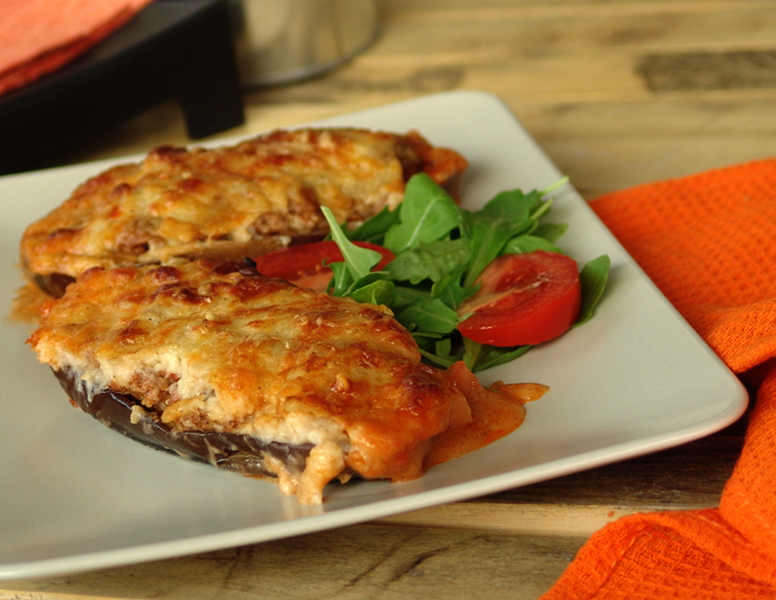 This is another traditional recipe with a little tweak. The stuffing is made with vegetables and minced meat. If you like, you can use only  ground meat, and proceed in the same way. In Greece they are called ‘papoutsakia’ that is ‘little shoes’. The dish can very easily become a vegetarian. Just omit the meat and increase the chopped vegetables. Moreover, you can add any veggies you like. Don’t be afraid to experiment and decide which your favorite recipe is. Happy cooking! Put the olive oil in a frying pan and fry a couple of the eggplants at a time. With a spoon, pour hot oil in the ‘boat’. Don’t turn them over and don’t press them down, so as not to flatten them completely. Arrange the fried eggplants in a baking pan, the one next to the other.

Leave a couple of tablespoonfuls of oil in the frying pan and sauté the minced meat with the chopped flesh of the eggplants, the zucchini and the onions for about 10 minutes, stirring and breaking up the lumps of the meat. Add the wine and let the mixture boil until the wine evaporates. Add the tomatoes, cinnamon, cloves, parsley, salt and pepper. Simmer gently until the liquid has almost evaporated. Add half the cheese and stir well. Remove the cinnamon stick, taste and adjust the seasonings. Take the pan off the heat and leave it aside.

Place the margarine in a pot and melt it at a low temperature. Do not boil. When it is melted, add the flour and stir continuously until the margarine has been absorbed. Start adding the warm milk a little at a time, beating well after each addition, so that there are no lumps. Take the pot off the heat. Beat the egg yolk (that you have separated from the white) and add it to the mixture beating well. Add salt and pepper to taste and the grated nutmeg if you are using it.

In this case the béchamel should be quite thick, so it will sit on the eggplant halves. If it is too runny, you can add some more flour, sprinkling it with a strainer so that you don’t get any lumps, and stir. Taste and adjust the seasonings.

Now fill the eggplant halves with the meat/vegetable mixture. Cover with the béchamel sauce. Put about 3 tablespoonfuls of water at the bottom of the pan, and add about 3 tablespoonfuls of chopped tomatoes in the spaces between the eggplants. Sprinkle some cheese and breadcrumbs on the béchamel and bake in a preheated oven at 180oC (360oF) for about 40 minutes, or until nicely browned.

Serve it with feta cheese and salad.