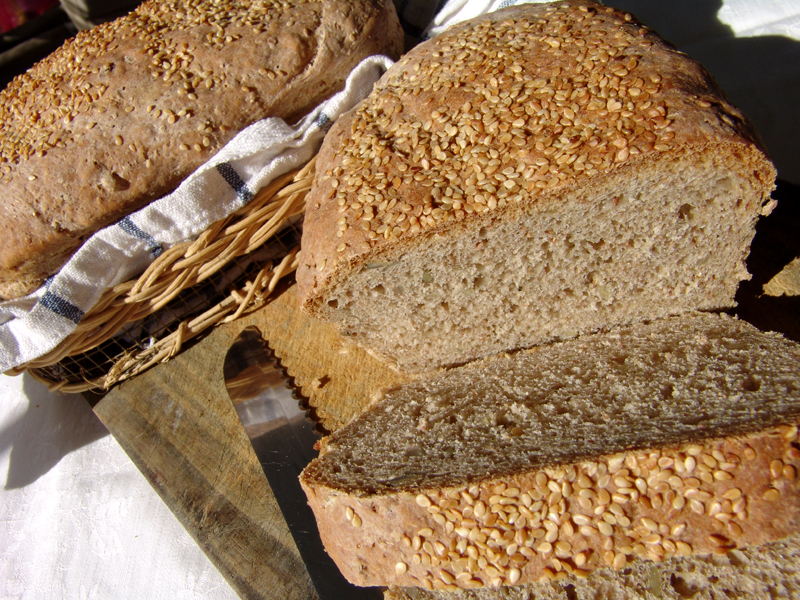 I love brown bread but unfortunately the bread they sell in the shops feels more like a tasteless piece of sponge than bread. That’s why I have been making my own for some time. I add a variety of seeds, so that apart from being more compact, it has added nutritional value. Try it and I am certain that you won’t buy the ready made stuff ever again.

Take 3 teaspoonfuls of the yeast and dissolve it in a little water. Add a tablespoonful of flour and a little water and mix until the yeast and flour are dissolved. Add a couple more tablespoonfuls of flour and a little water mixing until you have a paste. Leave it aside until it foams and increases in volume. You can put the container in the oven at a very-very low temperature. The oven should be turned on at less than 50oC – just turn the knob slightly to the right until the light goes on. The oven must be slightly warm.The mixture mustn’t boil, you just need to keep it moderately warm.

Put the wheat and the rye kernels in a small pot with enough water to cover them and boil them until almost soft. Check the water so that they don’t burn. Add the barley and a little more water and boil for about ten more minutes. Take the pot off the fire and let it cool. If there is any water left, you will add that too to the flour.

Place the seeds and the goji berries in a food processor and pulse a few times, to break them into smaller pieces.

Place the flours, the rest of the yeast and the salt in a large plastic basin and mix everything with your hand. Add the seeds and the berries, the rye, wheat and barley kernels. Add the yeast mixture that you had in the oven and mix well. Start adding the water little by little mixing and kneading until you have a firm dough. It may not take all the water, or you may need a little more water. It depends on the flours. Knead the dough a little until it is not sticky any more. Sprinkle lightly some flour on your work surface and knead the dough for about 10 – 15 minutes. Form a ball and coat it lightly with a little oil. Return the dough to the basin and cover the whole lot with cling film. You can cover the basin with a blanket and put in it a warm place. Or you can put it in the oven and let it double in volume. This should take about two hours.

When the dough has doubled, take it out of the basin and punch it down. Divide it in half and put each half in an oiled oblong baking tin. I use disposable aluminum tins. Return the tins to the oven and let the dough rise again. Brush the top of the loaves with a little water and sprinkle sesame seeds. Return the pans to the oven and bake for about 45 – 50 minutes at 170oC. No need to pre-heat the oven. When the loaves are ready, they make a hollow sound when tapped gently.

Remove them from the oven, let them cool a little so that you can handle them and place them on a cooling rack until they cool completely.