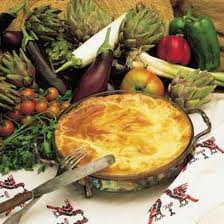 This is not only a healthy moussaka recipe but also my favorite. It is lighter than the “Traditional Moussaka Recipe”, and apart from the eggplants, I use zucchini and potatoes. The vegetables are grilled with hardly any oil, and I use non-fat milk for the béchamel sauce. It is a little more time consuming, because I cut up the veggies in small squares about 2 x 2 centimeters (1 x 1 inches). You don’t have to use a ruler, because it’s really not important. Just chop away, and it won’t take you more than 15 minutes. You can also use any of the gadgets that are sold that make up the cutting process easier and faster.

If you want to further reduce the calories and your meat consumption, you can use a mixture of minced meat (300 gr.) (0.660 lb) and the same amount soya mince (400 gr) (0.880 lb). You may need to use a bit more salt, but I assure you that nobody will know the difference.

I want to share with you something else that I do, which gives a nice taste to the dish. After I spread the vegetables-meat mixture in the pan, I pour a glass of milk over it and prick the surface here and there with the fork so that the milk goes everywhere.

Try it and you will be amazed!

NOTE: When I find the vegetables at a good price, I buy more and cut them up and grill them. When they cool down, I put them in plastic bags and freeze them for future use.

Wash the eggplants, and the zucchini. It is not necessary to place the eggplant in salted water. Peel and wash the potatoes. Slice the vegetables and cut them in cubes. Place them on a large pan, and drizzle about three tablespoonfuls of olive oil. Place the pan under a hot grill (about 250o C). Watch them often, so that they don’t get burned. When the pieces on top start to brown, stir them so that all of them (or at least most of them) are lightly browned. When the vegetables are lightly brown and have softened, you remove them from the oven and put them aside. Sprinkle them lightly with salt and pepper.

Put 2 – 3 tablespoonfuls of oil in a deep frying pan and brown the minced meat stirring and breaking up the lumps of meat until there is no pink colour. Add the onions and continue cooking for about 5 minutes longer at which point you add the garlic. Stir the mixture well and let it cook for a couple of minutes longer.

Add the wine to the pan and allow it to evaporate. Add the tomatoes and tomato paste diluted in a cup of water, the allspice and the parsley. Let the mixture boil for a few minutes and taste. Taste the sauce and if it is a bit sour, add the sugar or the ketchup. If it tastes all right, you needn’t add them. Turn the heat down and let the sauce simmer for about 15 minutes to reduce the liquid somewhat. However, the mixture must not be completely dry. There must be a certain amount of sauce, about two cups so that the moussaka is juicy. Season with salt and pepper. Taste and adjust seasonings. Turn off the heat and put aside.

At this stage, if you don’t have enough time to finish the dish, you may put the minced meat and the fried eggplants in separate containers and keep them in the fridge, finishing the recipe the next day. Or you may very well freeze them, and use them whenever you wish.

Place the margarine in a pot and melt it at a low temperature. Do not boil.

When it is melted, you add the flour and stir continuously until the margarine has been absorbed. Warm up the milk and begin adding it a little at a time, beating

well after each addition, so that there are no lumps. Take the pot off the heat. Beat the egg yolks (that you have separated from the whites) and add them to the mixture beating well. Add salt and pepper to taste.

The sauce shouldn’t be too thick or too runny. If it is too thick, add some milk or water. If too runny, you should let it simmer slowly for a bit longer stirring the mixture every now and then, so that it doesn’t stick to the bottom of the pan. If you are in a hurry you can add some more flour, sprinkling it with a strainer so that you don’t get any lumps, and stir. Always taste to check the salt before assembling the moussaka.

Take a pan about 28 x 36 centimeters (11 x 14 inches). Spread a very thin layer of bread crumbs at the bottom. You could oil the pan with a brush, so the right amount of crumbs will stick there. In another large bowl, mix the vegetables with the minced meat. Sprinkle some cheese (according to taste) and mix well again. Spread the mixture on top of the crumbs, and then spread the béchamel sauce on top. Sprinkle some more cheese on top and some bread crumbs.

Bake in a pre-heated oven at 170oC (340o F) for about 50 minutes, until cooked through and the top is golden brown.

Take the pan out of the oven and let it rest and cool down for one hour more or less. Then you cut it in squares. This pan will give you 12 large squares.