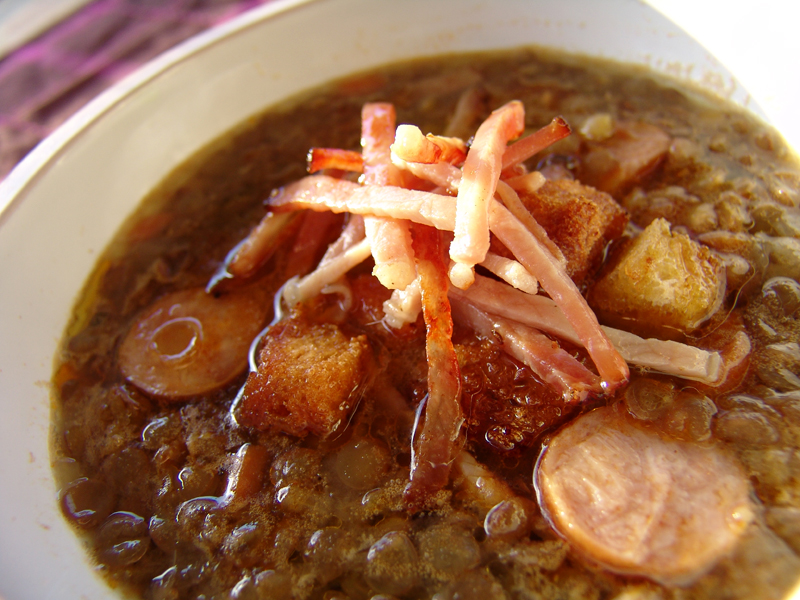 What I brought back from Austria? Beautiful memories, a cookbook, Culinary Austria, with the best and most famous Austrian dishes (by Helmut Deutsch) and of course, speck! Haven’t you ever tasted speck? It is something like bacon, but with a milder taste, less salty and juniper flavored. It can be eaten raw, thinly sliced or julienned in sandwiches, salads, on top of pasta dishes, omelets and wherever you use ham. These past few days it has been very cold in Greece and hot soups were the order of the day. I tried to make a lentil soup to resemble the Greek recipe, and to set off the taste of the speck. It was wonderful and everybody had seconds!

Place 2 tablespoons olive oil in a pot. Add the leeks, onion, garlic, potato, carrot and celery and sauté for a few minutes. Wash the lentils, drain them and add them to the pot. Add the rind, grated tomato and tomato paste, laurel leaves, red chili finely chopped up. Add a couple of cups of water, cover the pot and let it simmer for about 45 – 60 minutes. Check now and then to see whether there is enough water, adding a little more as needed. Check to see if they are done. Add the rest of the oil and stir. The soup should be on the thick side, not watery. Turn off the heat, take out the rind, add the vinegar and stir.

In the meantime, cut 3 – 4 slices of bread into cubes. Cut two thin slices of speck and then julienne them. Put the 2 tablespoonfuls of oil in a pan. Add the speck and sauté it for 1 – 2 minutes, teasing it with a wooden spoon, so that it doesn’t burn. Remove the speck and keep it on a small bowl. Put the cubed bread and the pan and fry them for a short while, until they turn golden brown. Alternatively you could broil the bread to make croutons.

Serve the soup in soup plates. Place a few croutons in the centre and some speck. Drizzle a little oil, and serve with fresh, crusty bread, a mixed salad and feta cheese.