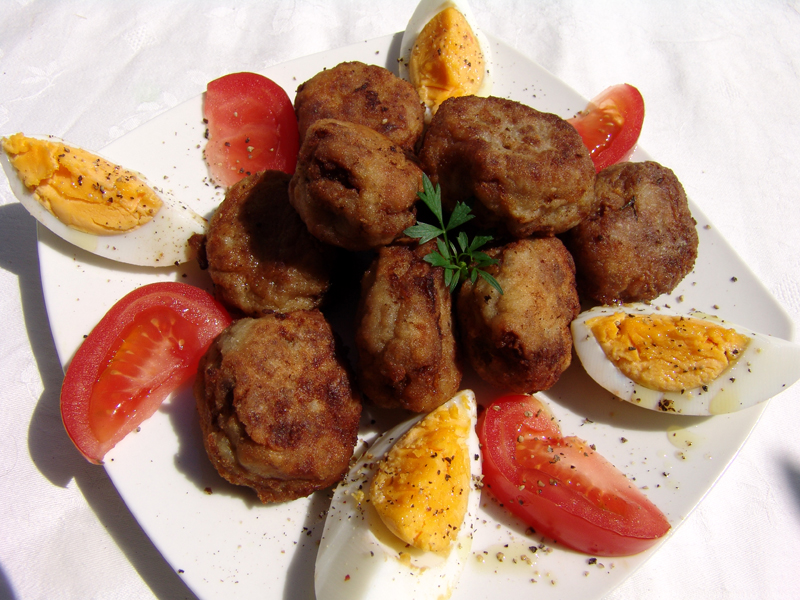 These tasty little meat balls can be eaten as a snack, or as a proper meal with chips and a nice Greek salad. Moreover, they are easy on the family budget. If things are a bit tight, you can add a bit more bread, or even a handful or two of soya mince soaked in hot water and drained.  Try them, and everybody in the family will be delighted.

In a bowl put the minced meat, the bread (squeezed) and the rest of the ingredients except the flour and the oil for frying. Knead the mixture well with your hands. Cover and leave the bowl in the fridge for about half an hour.

Put some all purpose flour on a plate. Take the bowl out of the fridge and take pieces from the minced meat mixture – a little bigger than a walnut – and roll them in your palms until you have a little ball. Lay the little meat balls on the flour. Roll them in the flour and line them up on one side of the plate.

Put some oil in a frying pan – about 1 cup depending on the size of the frying pan. Don’t use a very big pan, and don’t put too many meat balls in the pan at once. Heat the oil and then turn down the heat. When the oil is hot, start putting in the meat balls.Fry the meatballs in medium heat, so that they have time to cook inside, without getting burned on the outside.

When they brown on one side, turn them over. When they brown on both sides, remove them from the pan with two forks, and lay them on a plate covered with absorbent paper. Put in the pan more meat balls, and proceed until you have fried all the meat balls. If required, you can add a little more oil in the pan.

If you don’t want to fry the meatballs, you can oil a baking pan and lay the meat balls in neat rows. Bake them at 180oC. When they brown on one side, turn them over. Remove them from the pan when both sides have browned nicely.

You can make a bigger batch of meat balls. When they are cold, place them in polythene bags and freeze them. You can use them as and when needed.