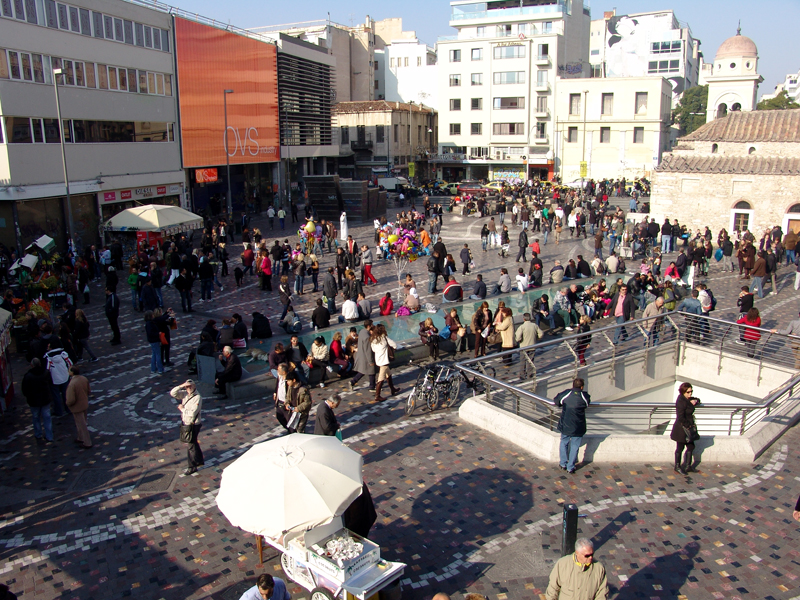 A stroll in downtown Athens is always pleasant, especially on a sunny Sunday morning after a few days of very cold weather and downcast skies. Monastiraki Square, which has given its name to a famous old district situated right under the Acropolis, is a very good choice. On the square there is a very old church dedicated to the ‘Koimisis of Theotokou’ that is the Assumption of the Mother of God.
A few meters away and next to the large columns and ruins of Roman Emperor Hadrian’s Library and the Roman Agora, you will find the Turkish mosque built in 1759. It is called Tzistarakis Mosque after the Viovode (governor) of Athens. The mosque was built with parts taken from ancient buildings of Athens. But Tzistarakis went too far and dynamited the 17th column of the Temple of Olympian Zeus in order to complete the mosque. With this act of violence an ancient curse was unleashed. The ancient Athenians believed that each column stood upon a curse, which held it in place in the earth. At the time of the destruction of the column, there was an outbreak of the plague and the people blamed the Viovode for this calamity.

A short while later, Tzistarakis was removed from power, as according to the law, all ancient monuments were the property of the Sultan and could not be used without his permission. It was said that at night thetempleofOlympian Zeuslamented the loss of its column so loudly that nobody could sleep. Eventually, Tzistarakis was poisoned and the lamentation ended. Today the mosque is a Ceramic museum worth visiting. Across the mosque is the main entrance to the flea market. The square and the surrounding streets are full of people enjoying the sunshine strolling along and looking at the shop windows. From the balcony of the mosque you can see the tavernas and you can even faintly smell the gyros and souvlakia roasting at the corner of the road, right behind the church.

I followed the narrow Hephaestus street with shops on both sides, until I reached Avyssinia’s square, where the main flea market is held every Sunday. There, you can find anything you can think of, arranged on sheets spread out on the ground. Cutlery and crockery, old records and books, copper pots and pans, glass figurines, old typewriters, radios and furniture are everywhere and people are swarming and jostling each other, bargaining with the seller, buying or just looking at the wares and passing their time.

At a little stand I saw some cutlery with a nice, intricate pattern and I bought a fork, a knife and a spoon for six euros as I felt that I had to buy something to remind me of the day. When I got home, I realized they were silver! I should go back next Sunday to complete the set.

Walking down the street, I came to Thissio, another district lying at the feet of the Acropolis. People were sitting at the cafes lining the pavement, drinking coffee and watching the sun that was starting to set. I couldn’t let the opportunity go to waste, so I sat at a vacant table and while I drank my cappuccino freddo with lots of chocolate on top of the foamy milk, I looked at the people strolling along, young children running around the parents, squealing with glee and some stray dogs threading their way among the endless forest of legs.

As the last rays of the sun lit up the Acropolis I made my way home. Dionysiou Aeropagitou street goes past the Odeon of Herod Atticus, at the south slope of the Acropolis. Across the road from the Odeon, beautiful neoclassic houses stand gracefully the one next to the other reminding us of a more elegant past. A little further down you will see the New Acropolis Museum. It is an archaeological museum and houses all the artifacts found on the rock of the Acropolis and on its feet, as well as statues like the Karyatides. Despite the fact that it is the largest modern building located so close to the ancient site, it is so beautiful that it doesn’t seem to be out of place.

It was dark when I reached the end of Dionysiou Aeropagitou street. In front of me stood Adrian’s Arch and behind it the columns of the Temple of Olympian Zeus all lit up and majestic. The moon had come out in the night sky and accompanied me all the way home.