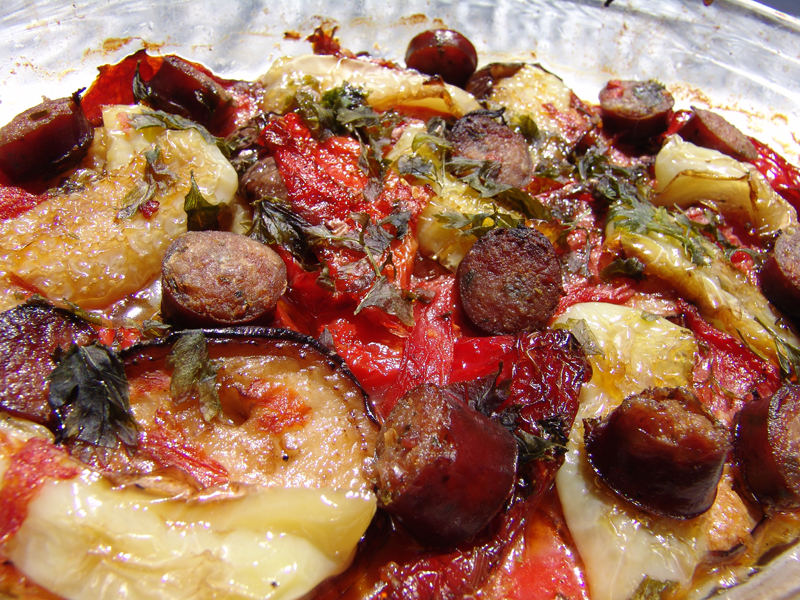 This is a special dish they make in Pelio, a beautiful mountain in North Greecewhich was named after Peleus, Achilles’ father. In antiquity, Pelio was believed to be the home of the Centaurs, creatures that were half men, half horses. The Centaur Chiron, was said to have tutored many ancient Greek heroes. Some of them were Heracles, Jason, Theseus and Achilles. There are many picturesque villages, and Tsagarada really stands out with well-preserved old houses that overlook theAegean Sea. Huge plane trees that are 1,000 years old stand in the middle of quaint squares, and there are old churches that have been there for quite a few centuries. Spetzofai is an easy dish, but very tasty and should be well worth your trying it.

Wash and cut the eggplants in rather thick slices. Place them in a bowl of water with some salt. Leave them for about half an hour. At the end of that time squeeze them to remove the extra water and dry them. Cut the sausages in slices, about 1 centimeter thick. Wash and cut the peppers in quarters. Chop the onion as finely as possible and  the tomatoes.

Put the chopped tomatoes in the pan and let it simmer for five to ten minutes so that most of the water evaporates. Add the eggplants, sausages, onion, peppers and the garlic in the tomato sauce. Also add the hot little peppers if you wish to use them. Add salt and pepper. Be careful with the salt especially is the sausage is salty. Shake the pan carefully and let everything simmer for about 10 minutes. The vegetables are already half cooked, so you don’t have to cook them for too long. Just long enough so that you have a nice thick tomato sauce. About half-way through the cooking time add the oregano, the parsley and the mint. Taste and adjust seasonings.

This dish is usually served as an appetizer. Fresh crusty bread, or toasted bread and feta cheese are the ideal accompaniments. If you wish, you can crumble some feta cheese on top of the vegetables.