Pork Shank baked in the oven 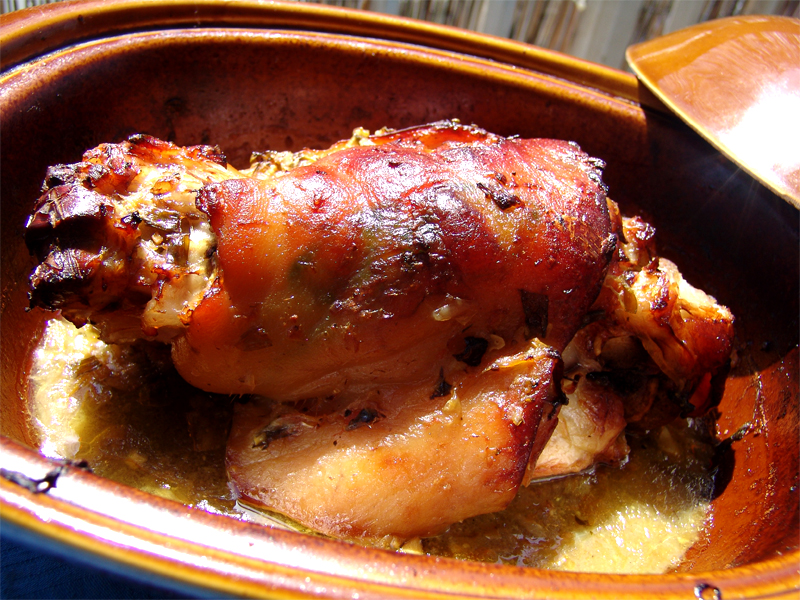 Take a cheap cut of meat and transform it into an outstanding delicacy fit for a king! Shanks require a bit of your attention, but then they will cook slowly in the oven until the meat is soft and falling off the bone. The juices in the pan make a fantastic sauce that you can drizzle over the meat and the mashed potatoes or boiled rice. Don’t forget to marinade the shank the previous night and leave till the time you are ready to cook it the following day.

The night before, put the shanks in a large container and add water to cover them. Add all the ingredients for the marinade. Cover the container and put it in the fridge. This helps the meat to absorb moisture so that it doesn’t dry out.

The following day, line a pan with the vegetables. You should use a pan with a lid, alternatively, you should cover the pan tightly with aluminum foil. I have an earthenware pan with lid that does the work perfectly.

Lay the shanks on the vegetables. Dissolve the mustard in the wine and pour it over the shanks together with the lemon juice and orange juice. Sprinkle oregano, rosemary, salt and pepper over the meat.

Cover the pan tightly and put it in a preheated oven. Bake at 170oC for about 3 hours. Every half an hour or so, baste the shanks with the juices.

In the meantime you can prepare mashed potatoes, or boil some rice.

When the meat is done, remove it from the pan and strain the sauce. Return the shanks in the pan and place them under the grill, so that the skin crisps up. Put the sauce in a small pan, add a couple of teaspoons of corn flour that have been diluted in cold water, and let it boil for a little until it thickens.

Serve with mashed potatoes or plain boiled rice together with a large green salad.