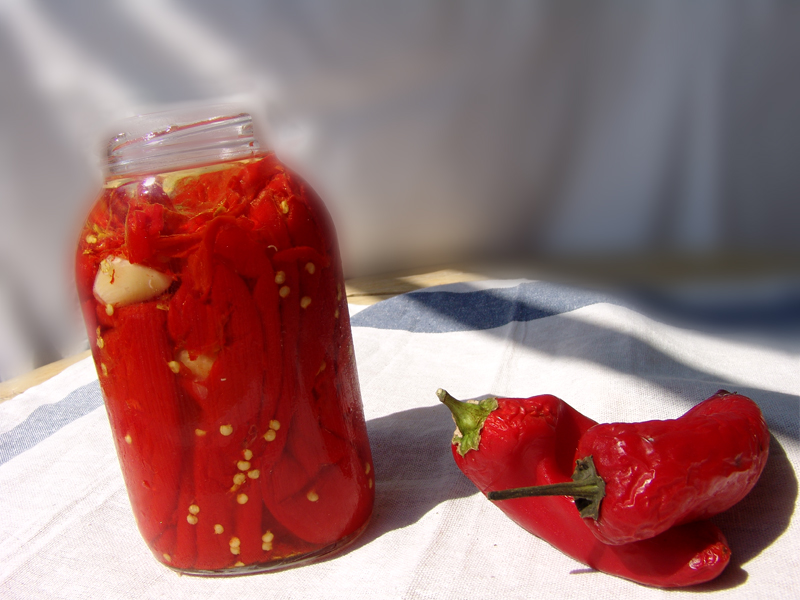 It is the middle of August and he peppers are not only at their best now, but they are very cheap as well. I bought 2 kilos beautiful red peppers for 0.80 €. Here is your chance to preserve them so that you can use them in winter when peppers are expensive. It is very easy and I think it is really worth your trouble.

Wash, boil and skin the peppers. (See Cooking Tips) In the meantime, prepare the jars. Keep in mind that after the peppers are boiled and skinned, their volume is reduced. Nearly two kilos of peppers fitted nicely in one large jar.

Wash the jars thoroughly, and place them in boiling water, together with the lids for about 15 minutes. Let them cool down (so that you don’t have any unpleasant accidents with the boiling water) remove them from the water and place them upside down on a clean towel. You have plenty of time, because the peppers take more than 5 hours to cool down, so that you can handle them.

After you have skinned the peppers, start packing them in the jar. To get the long peppers, that are now very soft, nicely in the jar, you can lay the jar on its side and slip the peppers inside, the one next to the other. You can also add cloves of garlic, and any herbs you like here and there among the peppers. After you have filled your jar, carefully pour some oil and add a little salt. You can use any oil you like. Make sure that the oil goes everywhere and covers the peppers completely. Put on the lids and pop them in the fridge.

As you use the peppers, add more oil so that the peppers are completely covered at all times.

You can use these peppers for cooking, in salads, in sandwiches, dips, and spreads. Let your imagination run wild!