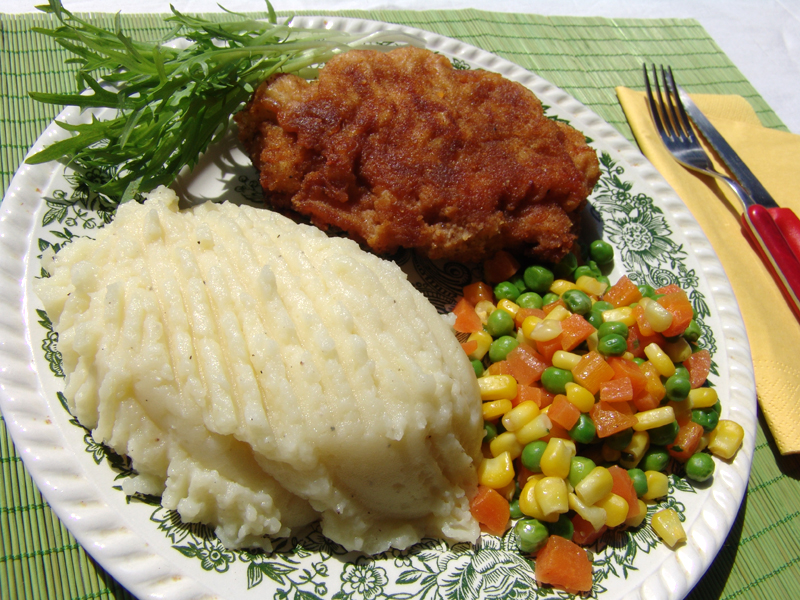 Schnitzel is not a traditional Greek dish but it is so very good and I thought it would be something different. I make it quite often, in its plain form, but then I thought that with a little tweak it would go up a notch! It is quite easy to make and it lends a festive air to the family table. I am giving you the recipe for two persons, but it is easy to increase the ingredients for more people. This is basically an add-what-you-like-best recipe and it is fun!

Place the schnitzels on a board and beat them lightly with a wooden pestle or a meat hammer until they are about ½ centimeter thick. Place them on a plate, drizzle the lemon juice over them and sprinkle some salt and pepper. Leave them for about half an hour to rest.

Put the chives, the estragon and the rosemary in the margarine and mix them well.

Now, take the schnitzels and spread one tablespoonful of margarine on each one. Sprinkle the parmesan cheese over the butter and place one slice of turkey. If the schnitzels are quite large you can fold them in two. If they are on the small side, take the second piece of schnitzel and place it over the turkey.

In a deep dish, beat the egg lightly with the water. Put some flour on one plate together with some salt and pepper and some bread crumbs on another plate.

Put the margarine and oil in a large non-stick pan. When it is hot, place the schnitzels in the pan and immediately turn down the fire to medium low. The bread crumbs burn easily. Fry for 2 – 3 minutes and turn them over to fry the other side for a couple of minutes. Place the schnitzels in a baking pan and bake them in a preheated oven (180oC) for 15 – 20 minutes.

Place each schnitzel on a plate and you can serve it with mashed potatoes, boiled potatoes, rice, a mixture of peas, carrots and corn, or whatever else you like, and a nice green salad.