Spaghetti with cherry tomatoes and garlic 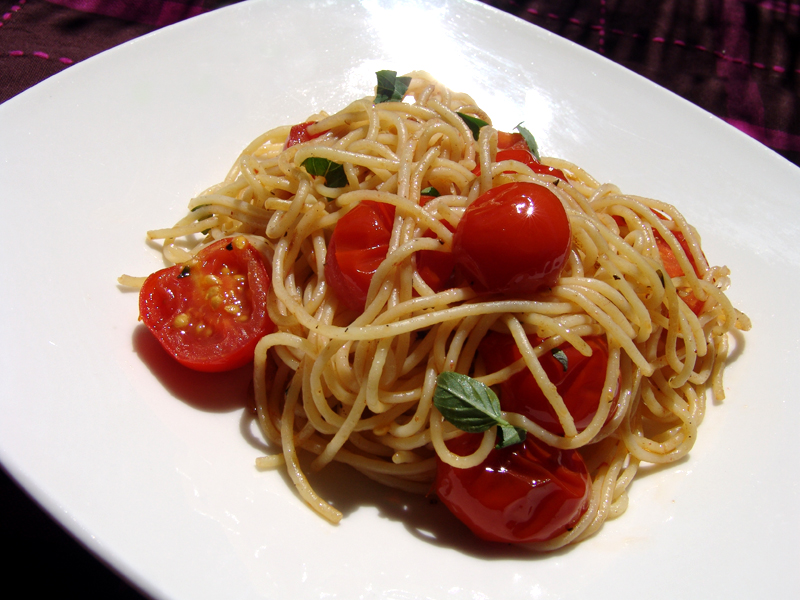 An extremely tasty and light summer recipe, with very few ingredients, requiring a minimum amount of cooking. Try it and it will become one of your favorites. I am giving you the amounts for two servings but it is easy to increase your ingredients according to the number of the diners.

Ingredients
Spaghetti for 2 generous servings
12 cherry tomatoes (or more if you wish) (some of them cut in half)
3 tablespoonfuls olive oil
2 cloves of garlic
3 tablespoonfuls white wine
Salt, pepper
Grated cheese

Bring a pot of water to the boil and prepare the spaghetti according to the directions on the package.

Wash the cherry tomatoes, dry them and cut some of them in half. Take a large pan and pour the oil in. Add the garlic. You can add the cloves of garlic whole, sauté them so that the oil gets their aroma and then remove them before browning, as they become bitter.

When the spaghetti is cooked and al-dente, drain it and add it to the pan with the tomatoes. You should keep about ½ cup of the water where the spaghetti was boiling, and if they seem too dry, add a little of this water.

Serve immediately and sprinkle some grated cheese over it if you wish.