Spaghetti with vegetables and tomatoes 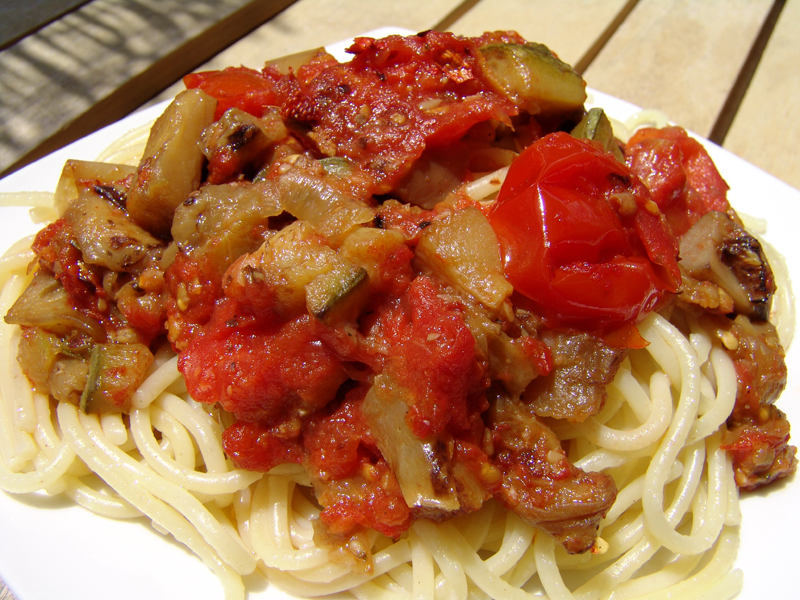 Spaghetti with vegetables makes a fantastic summer dish. It is light, very tasty, easy to make and can be enjoyed by everybody, even vegetarians, on a hot summer’s day. Don’t be daunted by the number of ingredients. You can use any vegetables you like and the herbs you like. You can also increase or decrease the quantities according to the number of hungry people you have to feed.

Wash the eggplant, zucchini and peppers, trim them, slice them quite thickly and dice them. The dice should be quite large so that they hold their shape at the end of the cooking time. Slice the mushrooms or cut them in four pieces, depending on their size.

Lay them on a baking pan, sprinkle some salt, pepper and olive oil and broil them until they are browned. Stir them now and then so that they brown all over.

Boil some water and boil the spaghetti according to the directions on the package.

Put 2 – 3 tablespoonfuls olive oil in a pan and sauté the onion. When it is golden, add the wine and simmer until it evaporates. Add the grated tomatoes and garlic and simmer for about 15 minutes, until the sauce thickens. Add salt and pepper and the cherry tomatoes cut in half at the end of the cooking time and stir.

When the vegetables are done, add them to the tomato sauce. Taste and adjust the seasonings. Add the parsley and the herbs you wish to use at the last moment. Add the spaghetti to the pan straight from the pot where it was boiled. Mix well, leave for a couple of minutes and serve. If you wish you can sprinkle some grated cheese on top.