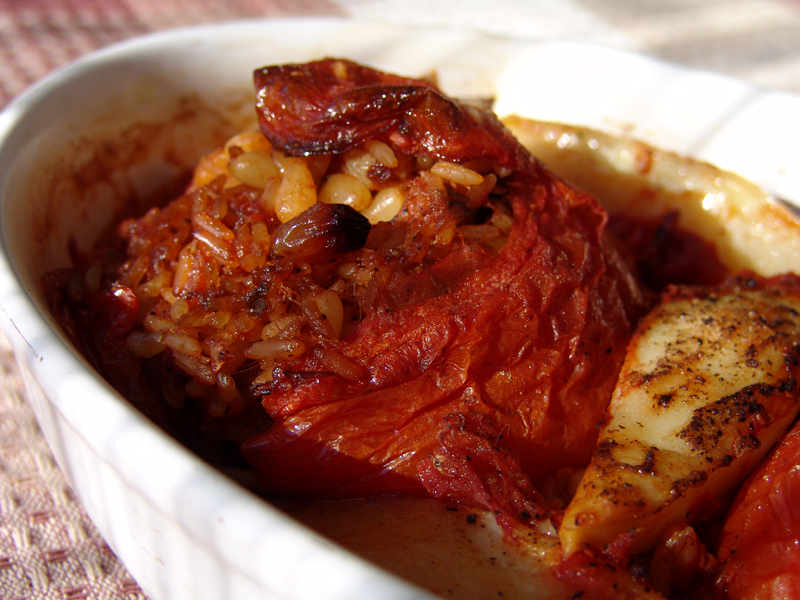 This recipe hails from the East, and in particular from Istanbul in Turkey. Its former name was Constantinople and the Greeks called it Poli, which means city. And this is a recipe that came to Greece with the Greeks that lived in the Poli, hence Politika.

I have a dear friend whose husband is from Istanbul, and her mother-in-law was an excellent cook. We spent many wonderful hours in her kitchen. While she was cooking and confiding the secrets of her recipes she was reminiscing about life in Istanbul. She had a unique way of talking, weaving Turkish words in the narration and we were transported to her City across the borders.

This recipe is dedicated to her. It is ideal for vegetarians, for those who are fasting during the Lent and at any time you feel like something meatless, light and very tasty.

Wash the tomatoes and peppers. With a sharp knife cut a small slice off the top. If you like, leave a bit of the flesh attached to the tomato, so that it acts as a hinge. Scoop out the flesh with a teaspoon, carefully so as not to break the skin. Put the scooped out flesh in a bowl, cut it up in smaller pieces and keep it aside.

Peel the onions, cut them in half and then slice them. You have to do it by hand, so that at the end of the cooking time they become creamy. If you blitz them, they will almost disappear. Put the onions with 1 ½ glass of water in a pan and simmer until all the water evaporates. Add the oil and sauté them at medium to low fire, so that they soften and become creamy.

Then add the pine nuts and sauté for 4 – 5 minutes, stirring so that they don’t burn. Finally, add the rice, raisins, cinnamon, cloves, salt and pepper and sauté for a couple of minutes. If you use only tomatoes, add half the pulp to the rice mixture. If you are using peppers as well, add about a can of chopped tomatoes to the tomato pulp, and add half of it to the pan. Alternatively, you can chop up 3 or 4 tomatoes and use them instead.

Bake at 180oC for about one hour. Check halfway to see that there is some water in the pan, so that the tomatoes and peppers don’t become too dry. Prick one potato with a fork to see if they are done. Let them cool down before serving.

Actually, these stuffed tomatoes and peppers taste much better the following day, because the flavors have time to blend together.