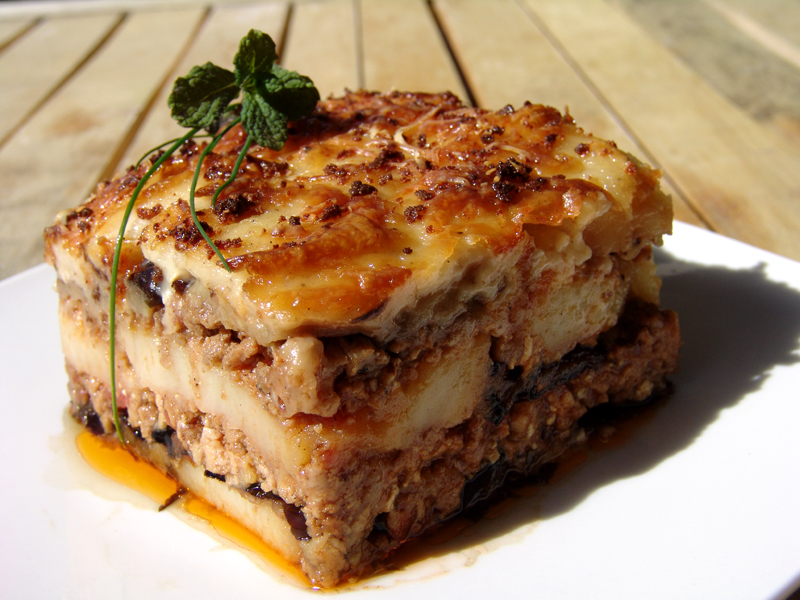 This is the traditional moussaka recipe, made with lightly fried eggplants, minced meat and white sauce. Try it, don’t be intimidated by the recipe. Follow the steps and nothing can go wrong.

Wash the eggplants, and slice them rather thinly (about 1 millimeter.) Place them in a bowl with water where you have added about three T salt and leave them for 30 minutes. Strain them and squeeze them to remove excess water. This helps them to absorb less oil when fried as well as remove any bitterness.

In the meantime, add 2 – 3 tablespoonfuls of oil in a deep frying pan and brown the minced meat stirring and breaking up the lumps of meat until there is no pink colour. Add the onions and continue cooking for about 5 minutes longer at which point you add the garlic. Stir the mixture well and let it cook for a couple of minutes longer.

Add the wine to the pan and allow it to evaporate. Add the tomatoes and tomato paste diluted in a cup of water, the allspice and the parsley. Let the mixture boil for a few minutes and taste. Taste the sauce and if it is a bit sour, add the sugar or the ketchup. If it tastes all right, you needn’t add them. Turn the heat down and let the sauce simmer for about 15 minutes to reduce the liquid somewhat. However, the mixture must not be completely dry. There must be a certain amount of sauce, about two cups so that the moussaka is juicy. Season with salt and pepper to taste and add the oregano if used. Taste and adjust seasonings. Turn off the heat and leave aside.

Put enough oil to cover the bottom of a frying pan. Pat the eggplant slices dry and when the oil is hot you start frying them. When they brown on the one side you turn them over and when they brown on the other side as well, you remove them from the pan and place them on kitchen paper to absorb the extra oil. You can add more oil in the pan if needed as you go along, until you have fried all the eggplant slices.

At this stage, if you don’t have enough time to finish the dish, you may put the minced meat and the fried eggplants in separate containers and keep them in the fridge, finishing the recipe the next day. Or you may very well freeze them, and use them at a later date.

Place the margarine in a pot and melt it at a low temperature. Do not boil. When it is melted, add the flour and stir continuously until the margarine has been absorbed. Warm up the milk and begin adding it a little at a time, beating well after each addition, so that there are no lumps. Take the pot off the heat. Beat the egg yolks (that you have separated from the whites) and add them to the mixture beating well. Add salt and pepper to taste.

The sauce shouldn’t be too thick or too runny. If it is too thick, add some milk or water. If too runny, you should let it simmer at very low heat for a bit longer stirring the mixture every now and then, so that it doesn’t stick to the bottom of the pan. If you are in a hurry you can add some more flour, sprinkling it with a strainer so that you don’t get any lumps, and stir. Always taste to check the salt before assembling the moussaka.

Take a pan about 28 x 36 centimeters (11 x 14 inches). Spread a very thin layer of bread crumbs at the bottom. You could oil the pan with a brush, so the right amount of crumbs will stick there. Place the eggplant slices, the one next to the other until the crumbs are covered. Then spread the minced meat mixture over the eggplant. Sprinkle a couple of handfuls of grated cheese over the minced-meat. Now place the rest of the eggplant slices over the meat mixture, covering it completely. Again you can sprinkle a handful or two of grated cheese. And last, spread the béchamel sauce over the eggplant, and sprinkle grated cheese and some breadcrumbs on top.

Bake in a pre-heated oven at 170oC (340o F) for about 50 minutes, until cooked through and the top is golden brown.

Take the pan out of the oven and let it rest and cool down for one hour more or less. Then you cut it in squares. This pan will give you 12 large squares.