Varvakeios – The Central Market of Athens 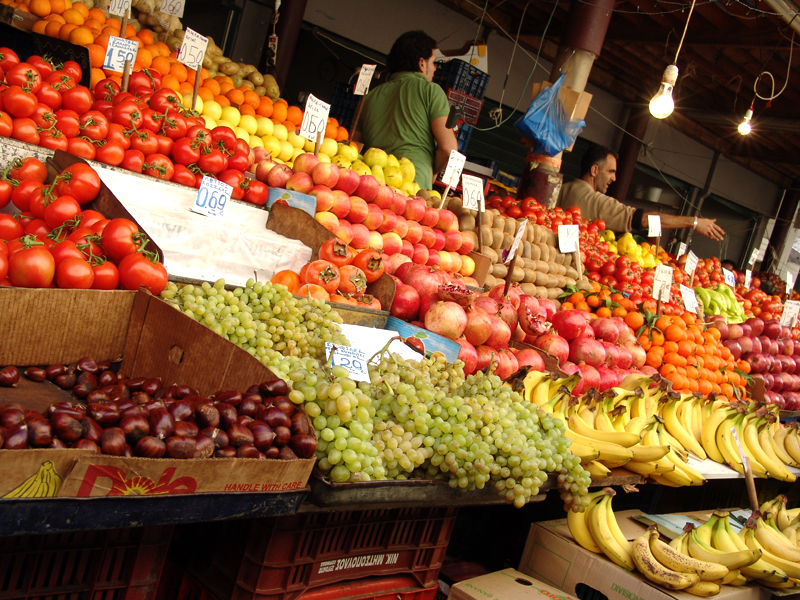 The market was named after the great Greek benefactor, Ioannis Varvakis. He was born on the island of Psara in 1745. This tiny island with its fleet of ships later played a leading part in the struggle for freedom against the Turkish domination. His father was an important ship owner, and started teaching eight-year-old Ioannis the business. At ten, Ioannis could fire a rifle and handle the ship’s canon. At 18 he built his own ship and turned to piracy, like the rest of the ship owners from Psara.

Later he went toRussia, and after many mishaps and adventures he found a way of making a lot of money. He exported caviar. In 1815 he settled with his family in a town near Odessa, where a group of people organizing the revolution of the Greeks against the Turks had their headquarters, and helped their endeavors in many ways. Varbakis also gave a part of his large fortune to build hospitals, bridges, canals and other things inRussia. He died on the island of Zakynthos in 1825. He left one million rubles for the construction of theVarvakeio School, and bequeathed the largest part of his fortune to the Greek Government. One of the things built was the Central Market of Athens, which was completed in 1886.

Today, the market is the life of the city and it never sleeps. Even before the crack of dawn the trucks line up the street and men unload meat and fish, to stock the shops for the people who will be visiting the market a bit later to shop here. Apart from the shops, there are restaurants that are open 24 hours a day and have been here for about 150 years. Before the sun rises, you will find here all sorts of people who come to eat and the favorite dish is hot tripe soup. People like the famous actress Melina Merkouri used to frequent these restaurants, together with politicians and artists and they danced and sang the night away! People who have been working here since the 1960’s remember the glory of the Varvakeios Market when the tavernas were full of people and music could be heard at all hours of day and night. Today things have changed somewhat. The market is full of people during the day, but at night it has lost its former glory. One restaurant owner says that now there are many homeless young people who go begging for a plate of food. And as Greeks are generally good-hearted and hospitable, these people never go away with an empty stomach.

A visit to the market is always enjoyable and interesting. The vendors shout loudly advertising their wares. The meat and the poultry are hanging on hooks and the prospective buyers are inspecting them before deciding to buy. And here is the free-range chicken I bought – first one on the left. Actually it is not a chicken; it is a rooster weighing four whole kilos, nearly 9 lb. It was heavy! I will tell you how I cooked it and I assure you, it was heavenly. If you have ever tasted free-range poultry you know the difference. The mass-farmed chickens are totally tasteless compared to these beauties. I don’t know if you can get free-range chickens where you live, but if you can find them, do buy one! You will become addicted.

Then I went to the fish market. I always go to the fish market even if I don’t want to buy anything. I love fish and everything that comes out of the sea, and I love looking at the fresh seafood lying on the marble slabs. As the rooster was very heavy I didn’t intend to buy anything, but then I saw fish eggs on a tray. Perhaps some of you will go “yak”, but you don’t know what you are missing if you haven’t tried them. When I buy fish, I look for pregnant ones, because I love fish eggs. Think of caviar, but much, much, much cheaper and not so salty. I couldn’t resist the temptation and I bought the contents of the tray! Next time I will get a beautiful gilthead sea bream and roast it on an open spit fire. Across the street from the meat and fish market is the fruit and vegetable market. Here you can find fresh vegetables and fruit at very good prices, stacked tastefully on the stands. There are also stands with different kind of olives from all over Greece. Here too, the vendors shout at the top of their voice and call the people to come closer and inspect the merchandize.

Around these stands, there are shops that sell cheeses, cold meats and all sorts of gourmet foodstuffs. There, you can also find Russian, Polish and other such little grocery stores, filled with delicacies from those countries. I love to browse and discover new things. From there I buy barley and buckwheat that I like to add to the soups instead of rice and I can’t get in the greek super-markets. I have been walking around for about three hours, and it is time to get home and see what I can do with my rooster!